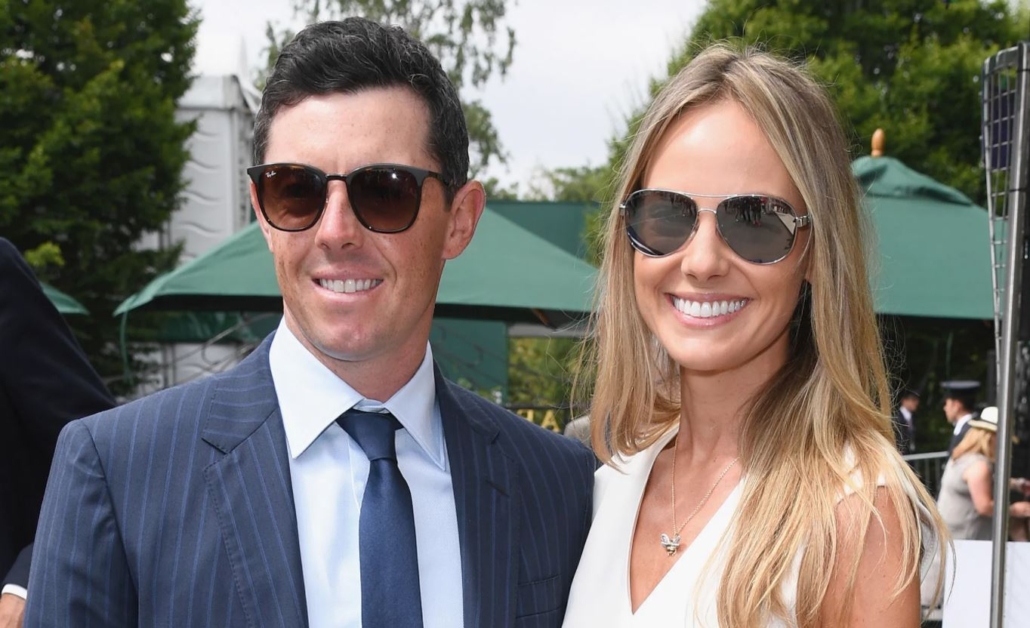 If you know anything about golf, you’ve heard of Rory McIlroy, but let’s not forget that a man isn’t only his sport. Beside every great man, is a great woman and that is certainly the case with Rory McIlroy.

So, who is the woman behind Rory, how did they meet and what is HER story? Her name is Erica Stoll and she’s played an important role in his life, but also his career.

Discover the true facts about this couple’s history stretching over quite a few years.

Who Are The McIlroys? 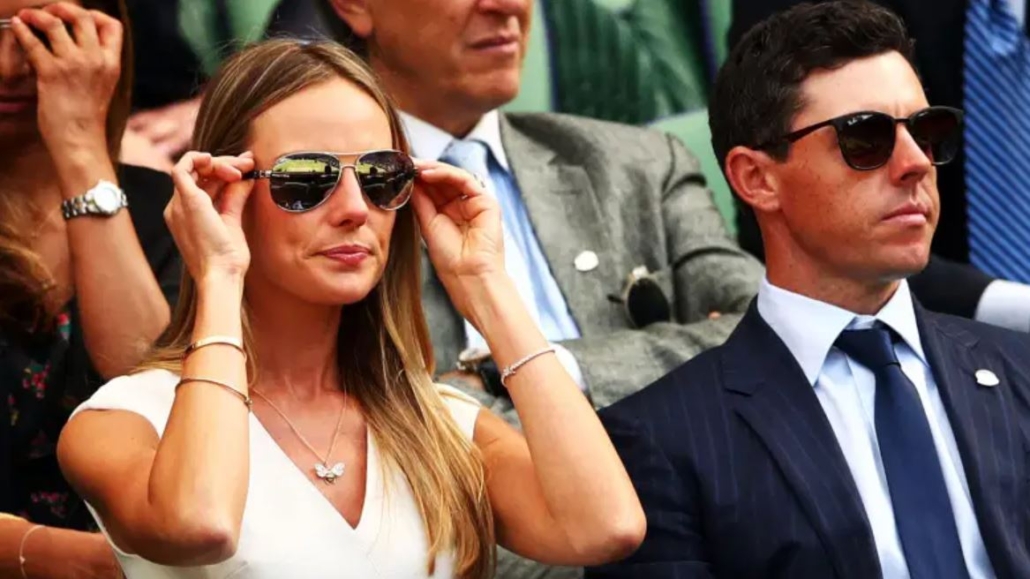 Rory McIlroy is a golfer originally from Ireland who started playing professionally in 2007. He has been world number one in the past and has won major championships.

By his side you’ll often find Erica Stoll, his wife. She hails from New York and is a former PGA employee. After preventing him from being late for tee off during a major tournament, they eventually became a couple.

Today she enjoys touring the world, attending the championships her husband plays in and raising their young daughter.

How Did Rory And Erica Meet? 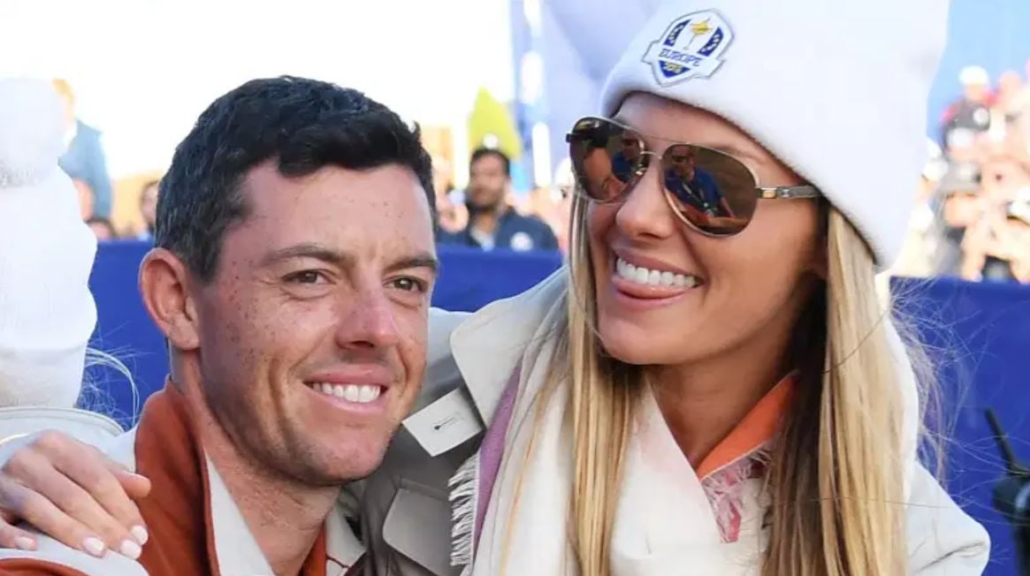 Who knew sleeping late could help you meet your future spouse? Erica and Rory’s story starts in 2012 when Rory was playing in the Ryder Cup. He somehow overslept, Erica noticed and managed to save the day.

She first considered driving him to the course herself but took it one step further and organised a police escort for him. He was on site with 12 minutes to spare.

Romance only came later. Rory broke up with his fiancé, Caroline Wozniacki, in May 2014. In the following year Rory and Erica officially started dating and got engaged in December. TFP says this took place with a diamond ring during a Paris holiday.

In this video you’ll see how the world started talking about this couple, from the very beginning.

The couple has been married and has shown themselves to be in a loving supportive relationship.

At the time of publishing, they are still married and building a family together. 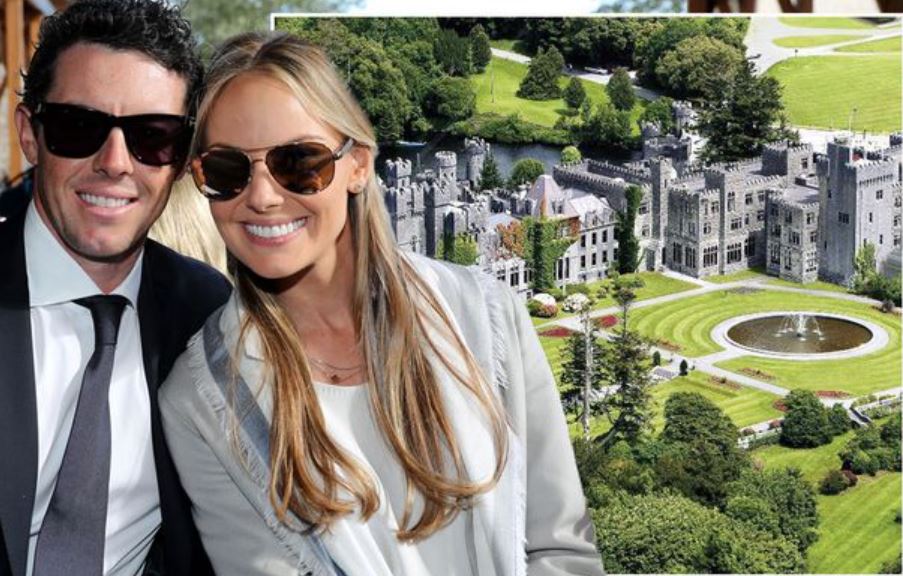 There was no expense spared for Rory and Erica’s wedding!

For starters it took place at Ashford castle in Ireland, so the golf celebrities could feel like royals. Although Rory has mentioned that he appreciates that Erica is a low key person—as Golf Monthly has reported in the past—the wedding itself was anything but.

At the castle in County Mayo, celebrity guests included singers Chris Martin as well as Niall Horan of One Direction. Of course there were a few pro golfers, such as Paul McGinley too. For entertainment, none other than Stevie Wonder took to the stage.

The security at the wedding was so tight that you won’t easily find a picture of their special day. As the Irish Times reported, each car was checked at the castle gates. With a bridge making up part of the entrance to the castle, it was easy to keep fans and the press away from the couple and their guests. Some guests even arrived in by helicopter.

According to Golfweek, it’s said the wedding cost around $1.2 million. Costs included a fireworks show at an expense of a few thousand dollars by itself. That wasn’t the end. Afterwards the couple enjoyed a honeymoon in Canouan Island. 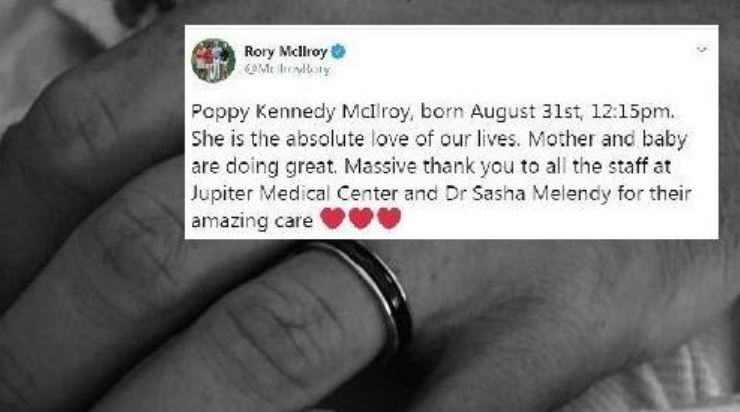 Rory and Erica became parents in August 2020. Their first child, a girl, has the beautiful name of Poppy Kennedy McIlroy. The baby was born at Jupiter Medical Center. 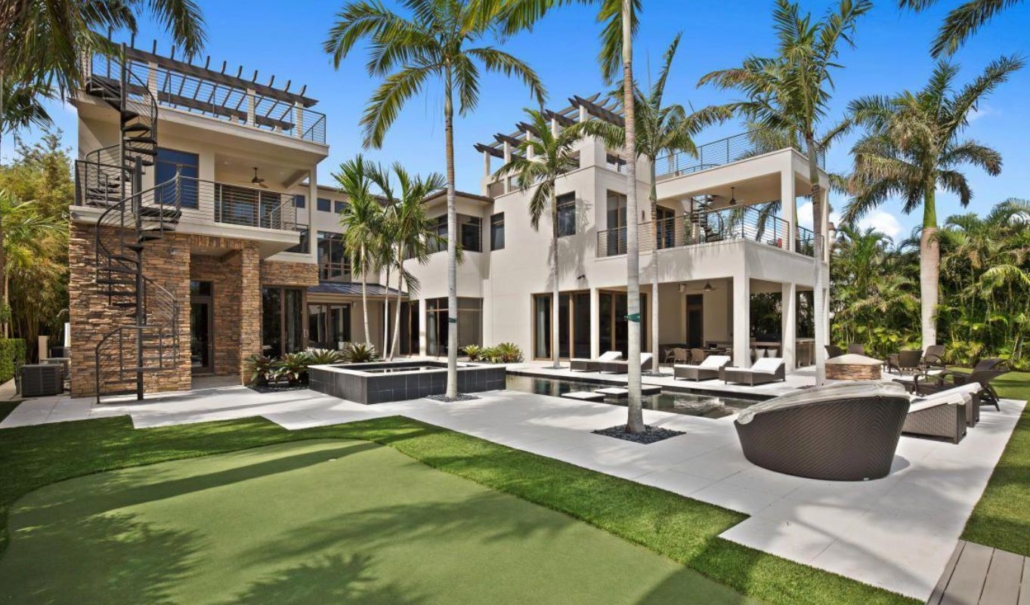 From Glamour Path we learned that Erica and Rory still call Florida their home, living in a Miami mansion. The house cost $8.5 million and it has seven bedrooms.

There are also unique spaces like a recording studio and a gaming room. The property itself spans 12 800ft².

Apart from their US home, they also have a house in Ireland. This one is smaller, only having four bedrooms. Interestingly, it’s located in a village called Hollywood.

How Much is Erica’s Net Worth? 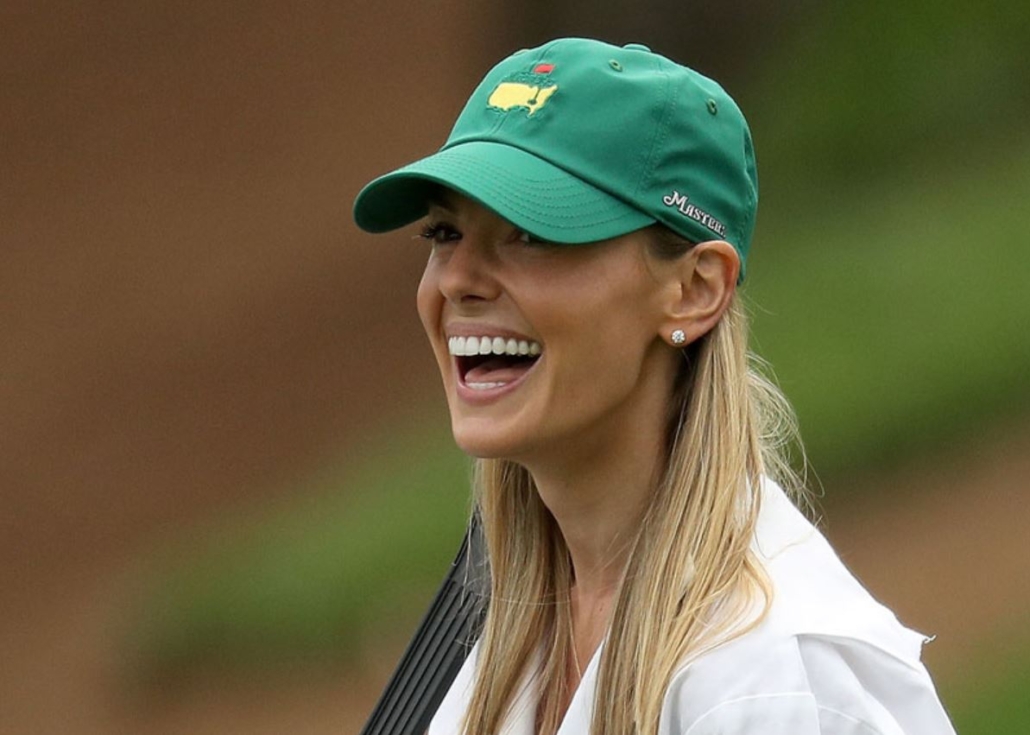 Erica earned a good income during her years working for the PGA. According to Popular Bio, her net worth is around $1 million.

What Does Erica Do for A Living?

When you’re married to a world-renowned golfer there’s no need to work for an income and we’re happy to report she has embraced this fact. Currently she is not employed, which gives her the freedom to travel with her husband around the world. A smart move for a young couple to spend time and raise their daughter together

Enjoying her free time with Rory doesn’t mean Erica doesn’t have an impressive skillset. According to The Sun, before they met and married, Erica worked for the PGA. This is fortunate, since she can easily understand the pressure his career entails. She was in that environment for years.

TFP specifically reports that Erica filled the role of Manager of the Championship Volunteer Operations for the PGA of America. She took on this title in 2011 and held it for a few years before resigning.

The Basic Facts On Erica

Because Erica doesn’t like the limelight, not much is known about her. We can confirm she has one sibling, a sister named Natalie, and she grew up in New York, after being born in Irondequoit, a part of Rochester NY, in 1987. Later on, the family moved to Florida, living in the Palm Beach area.

Her interests include sailing, after she learnt the skill from her father and grandfather, as well as baking and she owns a dog. TFP reports the dog’s name is Miss Lilly Belle. She has said that she doesn’t like the limelight, but you will often find her at golf events with Rory.

McIlroy & Wozniacki: What’s the Story of Their Breakup? 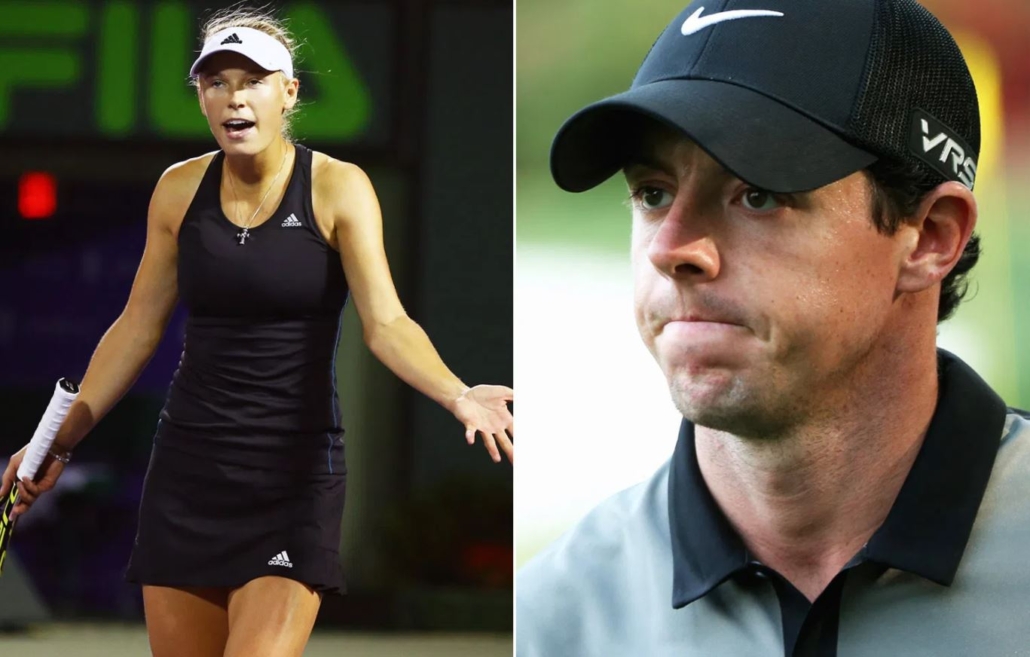 You can’t talk about Rory McIlroy without mentioning his relationship with the tennis star Caroline Wozniacki.

They were a couple from 2011 to 2014 and were engaged to be married. Rory decided to call of the wedding after the invitations were sent out. Apparently, according to Wikipedia, he broke up with Caroline over the phone.

Rory’s has said that he realized that he wasn’t ready for married life at that stage. Also, at first he thought it made sense to be with someone who has a similar lifestyle than he had. Eventually he came to a different conclusion.

Now, the fact that Erica is down to earth and can help him switch off from what a sporting career is about makes him happy to be with her. 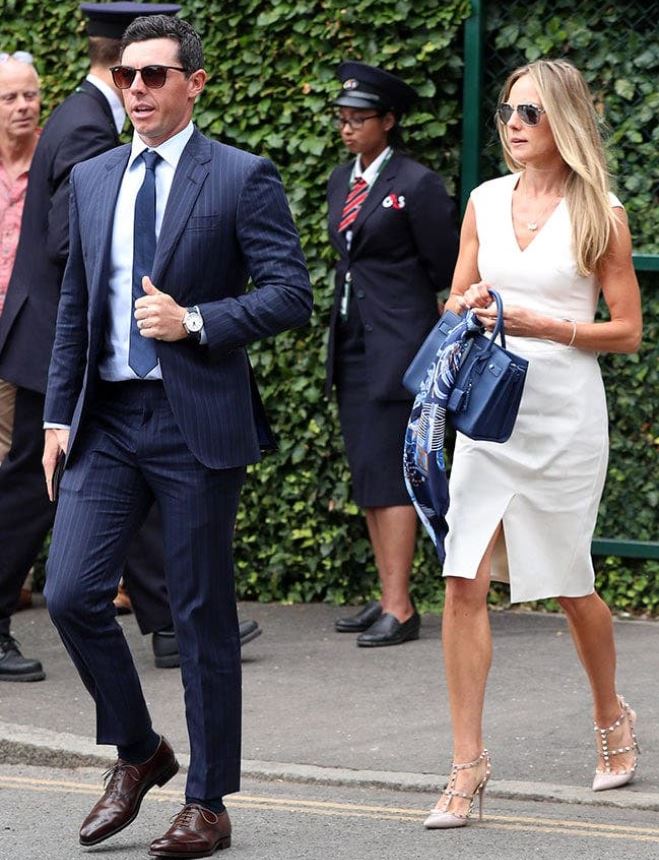 A celebrity couple is always fascinating but even with all the publicity it’s difficult to know everything about these individuals. Erica Stoll is one of these people who has managed to keep a lot about herself private from the rest of us.

Still, it’s clear that she’s an accomplished woman who through her quick thinking helped a golfer be on time to eventually beat his competition. In the process, she made a friend who eventually became her partner. She can enjoy the lavish lifestyle, while being proud of who she is as wife, mother and professional.

Do you have any other information about this interesting couple? We’ll keep you updated if we learn any more interesting facts.