Bushnell v4 vs Nikon Coolshot 20 Review – Which One Should I Buy?

Bushnell or Nikon? That is the question. Do you go with a rangefinder built by a company that has been making golf products for half a century? Or do you opt for one made by a company that produces high-end professional grade cameras and optical equipment?

The decision is a tough one considering the fact that golf rangefinders are indeed optic devices. In today’s review, we are examining products from two companies that have unwaveringly established themselves in their respective industries.

We have chosen these two because they are comparable in both price and performance. They are both easy to pick up and simple to use golf rangefinders so the decision would be difficult for anyone trying to decide between the two.

For us, the tough question right off the bat was ‘does Nikon make a better golf product than Bushnell?’ and conversely ‘does Bushnell make a better optical product than Nikon?’ This was the impetus for this comparison review so let’s get into it. 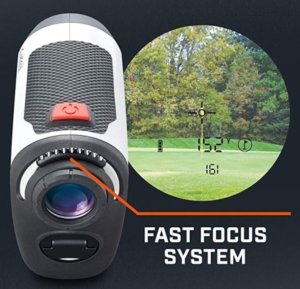 The Bushnell V4 we got came as part of the Patriot Package. In the box was the rangefinder itself, a soft (vinyl?) carrying case, a single CR2 battery and a protective skin. We popped the battery in and it was ready to go.

We didn’t use the protective skin at first but it actually started to drizzle a bit during our first round so we put it on and it actually came in very handy. It fit snugly and protected the unit from getting wet – although some droplets did manage to get on the lens which was a problem.

The skin was also a bit hard to take off when we were done with it as well. The key feature of the Bushnell V4 is the “jolt” pinseeker. The jolt lets out a little vibration when the rangefinder has locked onto the pin and reads out its distance.

The jolt feature did instill confidence that the unit has locked onto the pin and not some object behind it, so that was nice. It’s definitely inane but you get a sense of satisfaction every time the thing vibrates and you have the pin in site. So, good marketing ploy by Bushnell on that one. 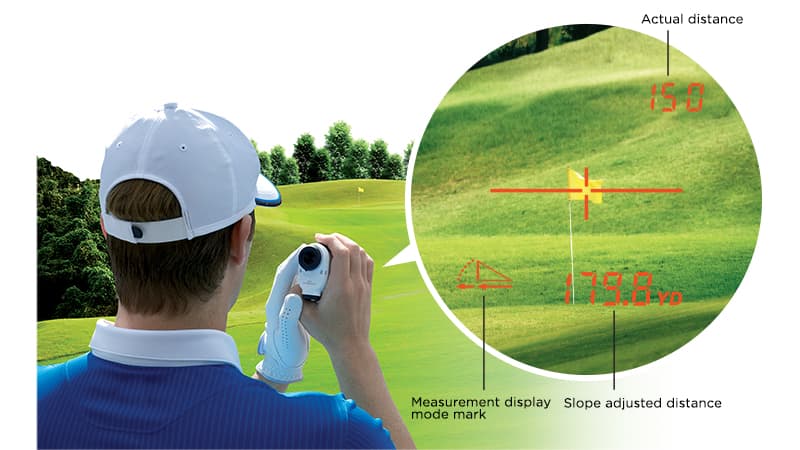 The Nikon Coolshot 20 is a lightweight laser rangefinder with its key feature being an 8 second continuous scan mode. In this mode you can simply hit the power button once and the rangefinder scans the terrain you are pointing it at and reads out distances to multiple targets for 8 seconds.

We found this feature to be helpful when we were measuring our shots down the fairway against multiple bunkers and hazards. We also found the range of accuracy to be about 450 yards (we tested it against multiple golf GPS watches).

The Nikon Coolshot 20 is a waterproof unit but you still need to keep the 20mm lens from getting raindrops on it. Speaking of the lens, it features 6x magnification and diopter view finding which we really liked because it made it useful for all of us; near or far-sighted.

This rangefinder also runs on a single CR2 battery which adds a bit to the total weight of the unit but that all being said, this is still one of the lightest rangefinders we have every played with.

The first priority mode was also convenient. It essentially detects major targets in its view and quickly gives the distance to the closest ones. This feature made it quick and easy to pinpoint doglegs, bunkers and pins.

The Bushnell V4 will run you close to $250 although you can expect to pay about ten dollars extra if you get the Patriot Pack like we did. The Nikon Coolshot 20 will run you about $230 at most retailers. 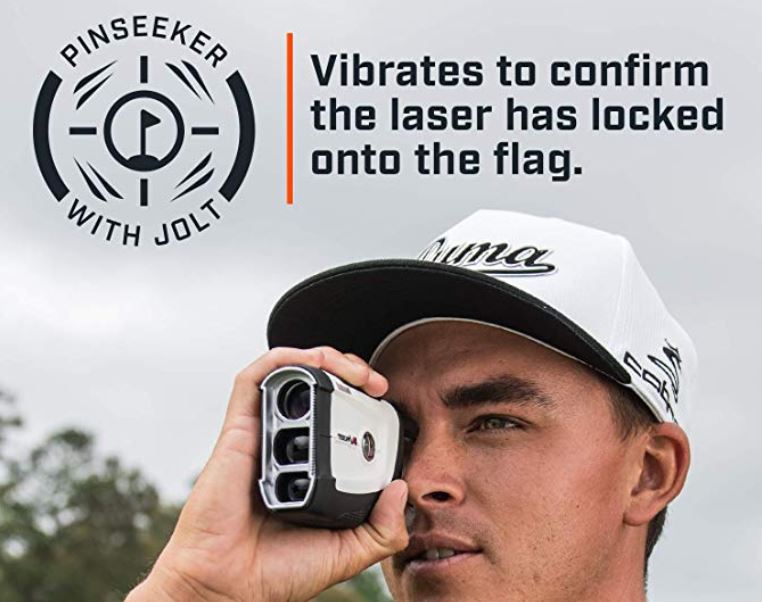 Both of these devices had their ups and downs on the links. The Bushnell allowed for great accuracy so long as the target wasn’t too far off. We noticed inconsistency in measurement if the target was over 400 yards away.

The Nikon Coolshot 20 was more accurate at further distances but the read-outs get disrupted if there is any debris (fog, drizzle, mist, sand etc.) in the air between it and the target.

Both units fit comfortably in the hand but the Nikon was lighter. Overall, they were both easy to use and gave distances quickly in ideal conditions. Get The Best Price On The Bushnell V4 here: 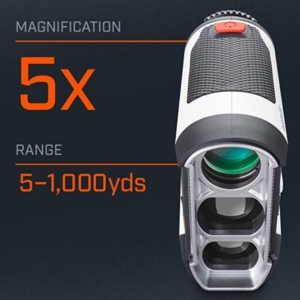 Get The Best Price On The Nikon Coolshot 20 here:

Which one to buy 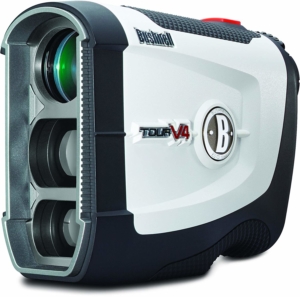 So which company made the better golf rangefinder? We have to go with Nikon on this one. The Nikon Coolshot 20 was simply more accurate at great distances and in the end that’s one of the most important factors for a rangefinder. You buy rangefinders because they accurately measure distance.

While we thought the “jolt” feature of the Bushnell V4 was cool and oddly satisfying, it is superfluous at the end of the day and definitely not worth the extra 30-40 bucks. The Nikon is cheaper and more accurate and that’s why it wins today.

So if you are having trouble deciding between these two golf rangefinders, definitely check out the Nikon Coolshot 20 first. 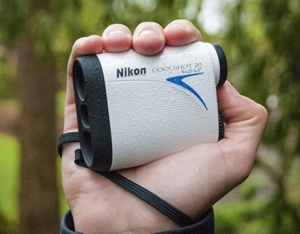 Get The Best Price On The Nikon 20 Here:

TecTecTec VPro500 vs Nikon Coolshot 20 Review – Which One Is Better?
Scroll to top