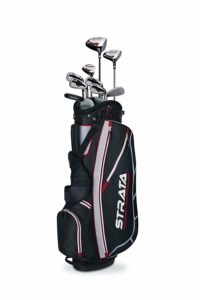 When looking for quality out of a new set of golf clubs, especially if you’re a beginner, there are not many that can beat the Callaway Strata Men’s Golf Club Set. It’s widely recognized as the top set for new players just starting the game and is one of the highest rated sets out there period. First off, from the looks of the clubs themselves, it spells “first class.” Secondly, its price. It’s one of the better beginner sets out there that you can get for around $200.

Then after purchasing, I got to test the clubs out on the driving range for the first time. I actually got a large bucket, finished with it, and then decided to pay for another large bucket because I couldn’t put these clubs down. While taking some time getting used to, after a while, they’re hard to put down. So let’s break it down a little more and look at what makes this set so great for new golfers out there. 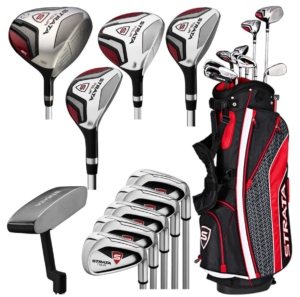 Plus, it’s a Callaway set. Callaway, one of the best brands there is in golf. Most golfers out there want a brand they can trust, a brand that many pros use. This is it. Phil Mickelson, Francesco Molinari, Henrik Stenson and Sergio Garcia all use Callaways.

Now I’ve got a fast swing speed, so for me, it’s perfect. Because of the size of this head, if you swing at a slower speed, you could have some issues with it. It will take some time adjusting to, but over time, you should be fine. But just keep that in mind.

The driver also allows you to keep the ball straighter on missed shots. It’s no doubt a club you will want to practice with a lot so you get used to it as it’s not your normal driver. It’s got size, pop and power to it. 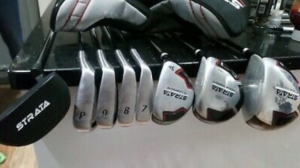 The 3-wood has a 15.5-degree loft to it along with a 42.5 shaft. The head size is normal for a 3-wood but much smaller than the driver so using it off the tee will also take some adapting to after getting used to the driver.

To me, the 3-wood was the hardest club in the bag to hit. I always have a hard time getting the trajectory I want on a 3-wood, and while this one has a nice sweet spot on the face, it’s not as easy to control my shots as the hybrids are. When hitting it off the ground, I tend to lose control a little more. That being said, it still is a great club and when I do hit it the way I want, I get great results. It just takes some time getting used to.

The hybrid, on the other hand, is my favorite club in the bag. It also takes some time getting used to off the tee because it has a small club head, but when using it in the fairway, I get the trajectory I want and also am able to control it better. The sweet spot is also solid with this club.

The only issue with the hybrid is I hit it so good that when I go to my first iron, there’s bit of a distance gap. I’ll hit the hybrid around 200 but the 6-iron around 170, so if I’m 185 out, I find myself having to hit a softer hybrid which is tough. 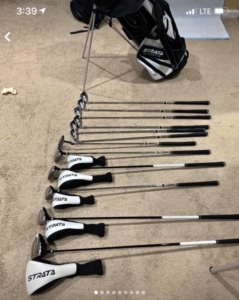 Unfortunately, you can’t hit the hybrid on every shot. When you’re inside of 100 or 150 yards, for most players, that means going to an iron. The good news is that these set of irons are easy to control and have a great feel to them.

There are five irons in your bag, starting with the six iron and going up to the pitching wedge. They have perimeter weighting and stainless steel shafts which allow for high precision and maximum distance. They also have an expanded sweet spot so you can mishit your shot a bit and still get the distance you want.

The pitching wedge is 46-degrees which gets you good height on the short shots and is comfortable in your hands around the green. Missing from the bag is the sand wedge, which if you want, you will have to get on your own. Sand wedges are good for bunker shots and also when you have a long chip shot with very little green to the hole. Some of the bigger sets out there also have gap wedges and lob wedges, which this set doesn’t come with.

Overall, though, the irons have a lot of forgiveness to them which is what you want out of a set. Personally, I would have liked to have seen it comes with a 4 and 5-iron because of the distance gap with the hybrid, but that can always be an add on just like the sand wedge.

The mallet head putter has some size to it with some weighting on the bottom which makes it easy to control the ball and gives it a good feel. It has linings on the putter head to help you get your ball lined up correctly. It’s 35 inches long which is ideal for most golfers. If not happy with the mallet putter, feel free to invest in one on your own as putters tend to not be overly expensive.

The ball comes off this putter head with some pop. It will take some time getting used to, but over time, you will come to love it. It is comfortable in the hands. 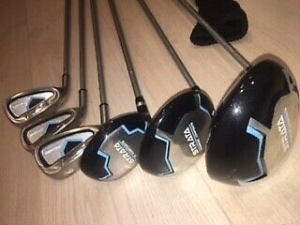 So the bag isn’t the lightest bag out there. Compared to some of the other newer ones, it’s a bit on the heavy side and seems a little shaky when you put it up against the stand. So keep that in mind when using the bag. Still, it’s not like carrying a bag of 30 bricks on your back. For the average person out there, it will feel comfortable when walking the course. There just happens to be lighter bags out there. There’s also only one design.

There’s a lot of qualities to like about this bag. For one, it has a dual strap that is padded and makes walking the course much easier compared to trying to one strap it. The stand that it comes with easy to set up and fold back. It also has five compartments for you to store things, including a cooler pocket for food or water while you play.

If it rains, just throw on the rain hood which is sturdy and will keep your clubs as dry as can be, until you have to use them. The Callaway set also has head covers for your woods and hybrid.

Given the price and the quality of clubs, the Callaway Strata Men’s Set is a home run, especially for beginners out there who want to take their game to the next level. That being said, some of the clubs takes some time getting used to, like the driver and the 3-wood. Don’t go out to the golf course right away. Spend some time on the driving range, get used to the feel of the woods and the irons, and spend some time on the putting green getting accustomed to the putter. After putting in some practice time, though, you should be ready to hit the links and start lowering your score.

I highly recommend getting this set if you’re a new golfer. It will make playing the game fun and enjoyable while hopefully making you a better player.

Check Out The Callaway Strata Golf Set On Amazon 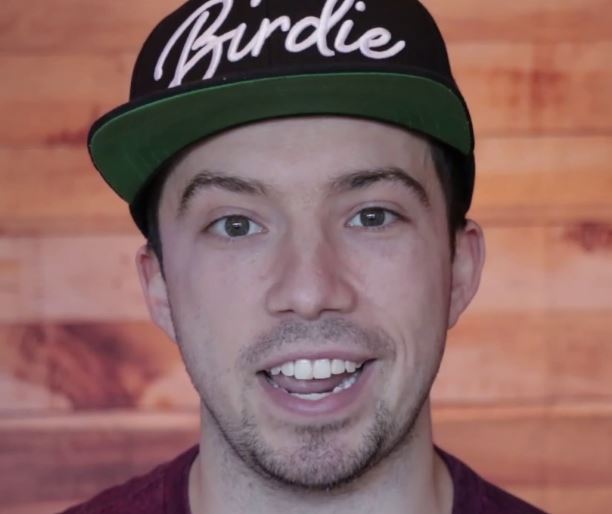 I am a scratch golfer with a passion for playing as much as I can. I also enjoy following the PGA Tour and heading to tournaments when I’m able to.